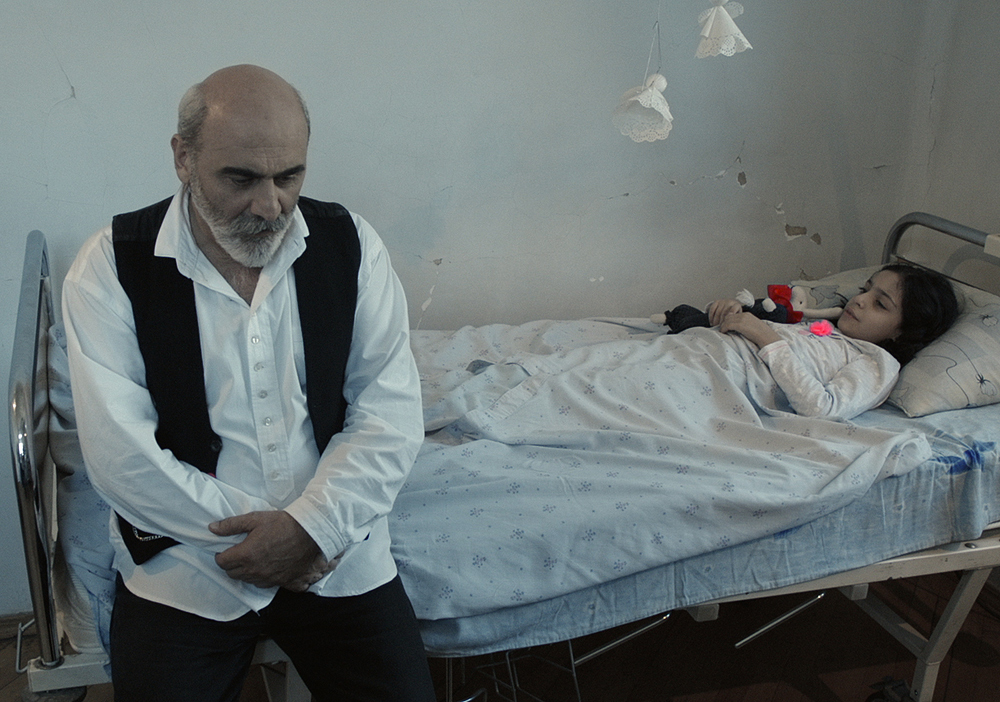 BLACK NIGHTS 2018 First Feature Competition
Review: Lorik
by MARINA RICHTER
29/11/2018 – A mysterious moment of divine intervention transforms an egotistical middle-aged actor into a man with a heart of gold in Alexey Zlobin’s drama.

Russian director Alexey Zlobin’s body-swap drama “Lorik”, which is showing in the First Feature Competition of the Tallinn Black Nights Film Festival, centres on an egotistical middle-aged actor called Laurence Alexandrovich (Michael Poghosian, who also co-wrote and co-produced the film), whose passion for theatre is rivalled only by his spite for the people around him. Bossy, rude and arrogant in his belief that anyone he speaks to can’t match his intellectual prowess, he is constantly either throwing tantrums about things that are not to his taste or sending quotes from classic dramas flying to intimidate his already petrified circle of collaborators and neighbours.

Modesty and kindness are not Lorik’s strong suit until he starts – literally speaking – walking in other people’s shoes. When the theatre shuts down for an alleged renovation, which will actually turn the building into the headquarters of a powerful, corrupt and money-hungry political party, Lorik loses his way. Forlorn and depressed about the unfortunate turn of events a day short of the premiere of a play based on Lewis Carroll’s Alice in Wonderland, he returns home to drown himself in self-pity. It is there that a mysterious moment of divine intervention takes place, while he is looking at the framed photograph of his actor parents, who died in a car crash a long time ago, leaving him orphaned as a child. Slouched on the floor and right in the middle of the famous monologue from Macbeth, “Life’s but a walking shadow, a poor player, that struts and frets his hour upon the stage…”, he is suddenly transferred into the body of his drunkard neighbour, Johnik. Incidentally, there are, all in all, too many monologues and quotes in the film, and they cover everything from Shakespeare, Cervantes and Carroll to the nursery rhyme “Humpty Dumpty”.
By quoting the Caterpillar from Alice in Wonderland after the opening credits – “It is wrong from beginning to end” – Zlobin is perhaps subconsciously making a statement about his confusing multiple body-swap storyline. After having taken the form of his neighbour, Lorik briefly becomes his aunt Tamara’s (Shake Tukhmanyan) house help, Chinar (Ani Galstyan), a bedridden eight-year-old girl called Asya (Irene Ayvazyan) and, finally, the corrupt politician and presidential candidate Garnik Karapetovich (also the father of Chinar’s boyfriend, Arthur), played by John Makaryan. Since the magic obviously doesn’t follow the same pattern each time and the souls bounce from one body to the next like dropped marbles, it is difficult to say how it actually works. It’s like a new, random-body-swap Freaky Friday in the Armenian language. The reason for choosing so many identity switches becomes clear quite early on in the film, and although it serves the logic of the script, it is the easiest and most obvious method of transforming an anti-hero into a man with a heart of gold.
There are some fine moments in Lorik, a movie that is mostly memorable on account of its production design (courtesy of Armen Ghazaryan), the selection of locations across Yerevan (Anna Zakaryan) and the dreamy original score written by one of the most important contemporary composers, David Haladijan. One of the most memorable scenes is a ceremony reminiscent of Freemason initiation rituals, held here by right-wingers who want to give their favourite politician Garnik – “possessed” by Lorik – the honorary title of “Knight of the Aquiline Nose”.
Lorik is an Armenian-Russian-Swiss-Serbian-Swedish-Cypriot co-production staged by K&MM Ltd and Team Production, and was supported by the National Cinema Center of Armenia.